Cariad Photography
North Georgia, United States
I have been an artist for as long as I can remember and photography is my passion. I used to be a successful fine artist, but since I shot my first wedding I never looked back. I am madly and completely in love with weddings, I guess it is the romantic in me :) 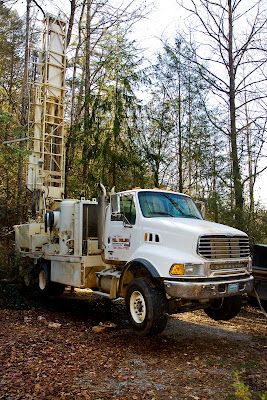 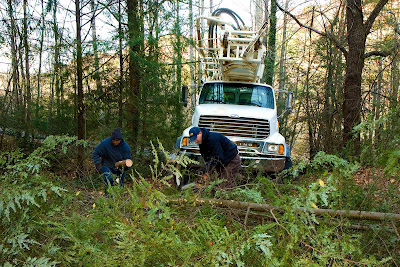 The well drilling company came by last night and brought their drilling rig over. It took over my entire driveway. My Golden Retriever Lacy was totally freaked out and it took every kind of persuasion I could think of to talk her into going potty late last night. She did not like the looks of that huge truck.
Early this morning the crew came and started drilling. They could not have picked a colder day and the wind is awful. Before they started they had to cut one of my price hemlocks, it broke my heart since I have spend the last year injecting the trees so they would not die from the decease that has afflicted all the hemlocks here in our Georgia Mountains. One thing I did notice after they cut the tree was that it did not have the nasty little critters on it that is killing these beautiful trees, so the injections seem to be working. That is good thing :)
Anyway, after they got the tree out of the way they started with the actual drilling.
After an hour of that they had to replace the PVC casings with steel casings, because they were hitting rock and needed those to make sure that they would not break as they went deeper.
It is afternoon now and they just hit 60 feet and I was just told that they have not even looked for water yet, because they had to get everything set up for it first. Now they are ready to go down to serious drilling............. and they have started as you can see from one of the photos even the tires of the rig are up in the air..........but don't ask me why.
Anyway I will keep you posted on how the day goes.........wish me luck that they don't have to go to deep to find water, because the deeper they go the more expensive it gets. Maybe they will find oil instead :)
Posted by Cariad Photography at 11:20 AM

Promote Your Page Too